When my German friend Kai Hanekken proposed me to make a composition using vinyl sounds I was at first sceptical to the thought. Being used and abused in (especially) electronica in the mid 80-s and onward, it is by now a cliché par excellence and I felt it to be a rather pointless undertaking. However, thinking a little bit further two things struck me. First I realized that no composition (that I heard of) had really gone deep into the investigation and exploration of vinyl noises before, so that in fact it was a field of a certain virginity hiding therein. Secondly, just because of its obvious cliché status, it was perhaps worthwhile to see if I could somehow twist it in a new and original fashion.

When Kai then offered me to digitize all of the various vinyl noises from his large vinyl collection I could not resist the idea anymore. I would have access to a very large material that I would not be able to extract myself (not to mention that I probably would not have the time nor the energy) and when I finally had the chance to create it in the 43 channel Klangdome of ZKM the game was on.

It came out as the single most hardcore piece I ever did to this date. Rough, aggressive, dark and generally obnoxious but in a rather pleasant way (in my mind).

I wanted the piece to gradually get to the point of ”the ultimate crackle” spreading the vinyl noise over the full frequensy spectrum and in the full volume of space. This can of course only be made in a rather big multi channel sound system so in the stereo version presented here, the sound image gets very dense, overly compact and even more ear scattering than intended. Feel free to listen and like or dislike it but remember to play it LOUD!

Thanks to Kai for insisting and spending so much time with the records and to ZKM for support. 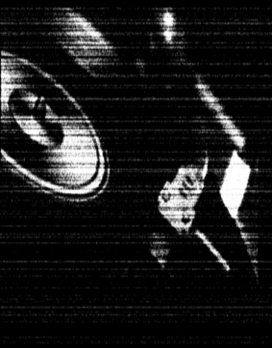