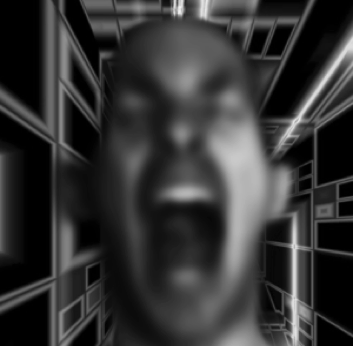 Metal music is big in Sweden. Since my youngest son is playing in a band I could not avoid the tradition even if I wanted to. Instead I got fascinated by the vocal technique used by the so-called “screamers” or “growlers” which is a kind of natural vocal distortion that gives the impression that the singer is ripping apart his vocal cords.

I suddenly had the urge to make a piece for a “growlers choir,” something I’ve never heard (and few others have). My son managed to get me four of the best growlers from my hometown to line up for a recording session. I also asked one of them to write some appropriately dystopic lyrics.

Metal aficionados always claim the importance of lyrics although it is most of the time impossible to understand any of the words. This is also true for Growl!. However I choose to put emphasis on two lines that are central to the metal dystopia: “Hell is us; Die we must”; a phrase that seems to have a lot of relevance in the light of climate change, international political crises, and human overpopulation.

Growl! came out as a mix between metal, electroacoustic, and electronica musical styles.

Growl! was realized in 2014 at the Métamorphoses d’Orphée studio of Musiques & Recherches in Ohain (Belgium), and premiered on February 11, 2015 at Espace Senghor in Brussels (Belgium).

The piece was commissioned by Musiques & Recherches. Thanks to Alexander Andersson, Henrik Blomqvist, Aron Parmerud and Axel Widén (recorded vocalists).